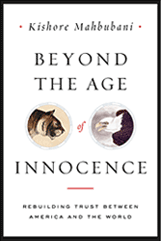 Many Americans know in their heart of hearts that something has gone wrong in America ‘s relations with the world.  But they don’t quite know why.  Or what triggered this.  A thought-provoking and deeply insightful book, Beyond the Age of Innocence explains the complex story of America and the world, and the seismic shifts that have taken place, unnoticed by many Americans.

The curious paradox is that America has done more than any other country to change the world.  Yet Americans are among the least prepared to cope with the world they have changed.  Without intending to, America has entered the lives of most people on Earth.  By sharing the American dream globally, America has sprinkled the stardust of hope into billions of eyes.  By refusing to make the mistakes of European colonists, it has liberated hundreds of millions, accumulating huge reservoirs of good will.  Tragically, when the Cold War ended, America did a U-turn, walked away from the world, displayed indifference to the plight of others and unwittingly alienated huge populations.  A majority of the 1.2 billion Muslims are clearly angry with America.  Many cheer Osama.  Similarly, America has been imprudent in its dealings with the 1.2 billion Chinese.  Reservoirs of good will have been replaced with reservoirs of anger and resentment.

But all is not lost.  There is hope.  Kishore Mahbubani is an old friend of America.  Growing up in Singapore , on the other side of the world, his life has been powerfully influenced by the American era.  In this urgently needed book, he sets out to explain both the global enchantment and disenchantment with America and what America can still do to save the situation.  American power remains the single most powerful force on the globe.  Wisely used and administered, it can both make the world a better place and protect America ‘s long-term interests.

There is an accumulated pool of wisdom within the American body politic that has enabled America to become the most successful society in the history of man.  This wisdom has been little tapped in recent years.  The founding fathers wisely believed that America should show a decent respect for the opinions of mankind.  This book explains how this can be done today.

“Sometimes it takes a foreigner to see a country whole.  Kishore Mahbubani is a Singaporean who has lived in and loves America.  In this elegant book he describes his hopes and fears about the country and the new world it finds itself in.  It is a remarkable exercise in both realism and idealism.  America needs more friends like him and the world needs more minds like his.” — Fareed Zakaria, author of The Future of Freedom.

“Kishore Mahbubani adores the Unites States and explains why the rest of the world does not.  With the calm wisdom of an honest and perceptive diplomat, he summons the better angels of our nature in order to save America from itself.  Everyone who is puzzled by the global distrust of God’s own country should read Beyond the Age of Innocence.” — Arthur Schlesinger, Jr.

“This is a lovely book, very personal and very reflective, a piece by someone who knows and loves America and, yet, given his cosmopolitan background, is able to see this country from without as well as from within.  It is also a cautionary tale, and one that the American leadership should take into account.  Kishore Mahbubani rightly warns the United States that it cannot walk alone, but will best fulfill its purposes when it strides out hand-in-hand with nations and international organizations that share the same vision.  This is a plea for cultural understanding, for reasoned leadership and, above all, for intelligence.  It would be good to heed such pleas.” — Paul Kennedy, author of The Rise and Fall of the Great Powers

“Kishore Mahbubani provides an absorbing, eloquent, and insightful perspective, enriched with personal reminiscences, on the impact, good and bad, of American power on the world.  His book is a must read for Americans especially but also for others who want to know what America has to do to promote a world that will be a better place not only for Americans but also for everyone else.” — Samuel Huntington, author of The Clash of Civilizations and Who Are We

“This shrewd book by Kishore Mahbubani, a premier international diplomat, feels like a farewell letter telling American friends that their country generally means well, but has little idea of its impact on peoples’ lives around the world, often affecting foreign lives more than their own governments and often unintentionally doing great harm.  He reminds us that our best asset is the American dream, the dream of possibilities and success, that still makes others want to be us.  He tells Americans how to get along better with the world, without pandering.” — Les Gelb, Former President of the Council of Foreign Relations

“Cogent, constructive criticism and practical, well-timed advice from a friend-Americans can’t ask more than that from Kishore Mahbubani.  He’s a child of globalization, a highly-esteemed and straight-talking scholar, a long-time and insightful resident of the U.S., and a powerful writer.  All those qualities are evident in this critique of the style and substance of American foreign policy.” — Strobe Talbott, President of the Brookings Institution

“Beyond the Age of Innocence is both a disturbing and challenging book.  Kishore Mahbubani asks a question of enormous significance for the decades ahead: can America which has contributed, by force of ideas more than military might, so much to the welfare of mankind in its first 200 years avoid the hubris and arrogance that has, in the end, brought down empires in the past? He plainly wants to believe the United States can restore the sense of constructive leadership the world so sorely needs.  At the same time, he leaves no doubt that this will require a sensitivity to global interests which will not come easily.” — Paul Volcker, Professor Emeritus of International Economic Policy at Princeton University

“With this book, Kishore Mahbubani establishes himself as the best interpreter of the world to Americans — and of Americans to the world.” — John Lewis Gaddis, Robert A. Lovett Professor of History, Yale University