SINGAPORE — The G-20 process is stalling. It needs a big kick in the butt. China should deliver it at the upcoming meeting in Hangzhou this coming weekend.

What’s the proof that the G-20 is stalling? Simple: the global economy is stalling. Since the G-20 summit was first held in 2008, with the explicit mission to “work together to restore global growth,” it has failed in its core mission. Indeed, the prospects for global economic growth have never looked so gloomy — Larry Summers recently suggested that we are stuck in “secular stagnation.”

Why is the G-20 failing? The conventional answer is that the G-20 is divided — the fiscal deficit countries (like the U.S.) want the fiscal surplus countries (like China and Germany) to do more to stimulate domestic demand. In short, differences of opinions on the correct economic responses are causing the G-20 process to stall. 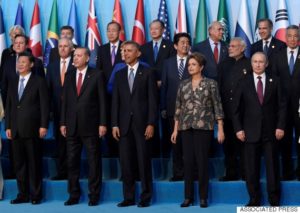 A good example is provided by China’s proposal to set up the Asian Infrastructure Investment Bank (AIIB). The G-20 agrees that stimulating greater global investment in infrastructure would boost global economic growth. As the leaders’ communiqué that followed the Brisbane G-20 summit in November 2014 explicitly said, “Tackling global investment and infrastructure shortfalls is crucial to lifting growth, job creation and productivity.” Yet, when China launched the AIIB, the U.S. campaigned fiercely against it and an anonymous U.S. Treasury official expressed American feelings well when he said in response to the British decision to join the AIIB, “We are wary about a trend toward constant accommodation of China, which is not the best way to engage a rising power.”

The honesty of this official is commendable. His statement brings out well the zero-sum attitudes of geopolitical “strategic thinkers.” The real tragedy here (and it’s a tragedy that cripples the G-20) is that these so-called “strategic” thinkers can’t think strategically and can’t see the big strategic picture of how our world has evolved. Most of the people advising the G-20 on “strategic” issues are guns-and-bombs people whose mental concepts are stuck in the 19th century. They wrongly assume, as the U.S. official revealed, that China’s rise can only be negative for the U.S.

Obama should announce that the U.S. will now join the Asian Infrastructure Investment Bank instead of opposing.

This may or may not have been true in the 19th century, but it’s certainly not true in the 21st century. We now live in a small interdependent world. If our priority is to restore global economic growth, it is now in China’s national interest to see a strong thriving American economy — and vice versa. It is vital to emphasize that global interdependence is not just growing in the economic sphere. It is equally true in our battle to combat global warming, pandemics like Ebola and Zika and the so-called Islamic State. In short, as I explain in “The Great Convergence,” all 7 billion occupants on Earth are sailing on the same boat. It is the fundamental responsibility of the G-20 to take care of our fragile global vessel.

The Hangzhou G-20 meeting can demonstrate that the G-20 leaders now understand better their global responsibilities by taking a few small but significant steps. President Obama can take the lead. He has nothing to lose since he is stepping down soon. He can demonstrate that America has liberated itself from zero-sum thinking by announcing that the U.S. will now join the AIIB instead of opposing it. Congressional approval can come later but the symbolic gesture will create a new positive chemistry for the G-20. 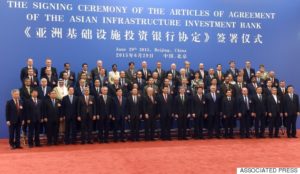 Leaders pose during the signing ceremony for the Articles of Agreement of the AIIB at the Great Hall of the People in Beijing on June 29, 2015. (Wang Zhao/Pool Photo/AP)

China can reciprocate by announcing that it is prepared to share its high-speed rail technology with the U.S. on preferential terms to help jumpstart the U.S. economy. Eventually, if China is allowed to build a high-speed railway from the Pacific to the Atlantic coast of the U.S., it will have an enormous positive effect on U.S.-China relations. China can make a start by proposing to build high-speed railways in California (from San Francisco to Los Angeles) and in the Northeast (from Boston to New York and Washington). Such symbolic projects will show that G-20 leaders now understand that concrete cooperation is preferable to issuing meaningless communiqués.

One point is worth emphasizing here. A China-U.S. partnership on infrastructure will be a match made in heaven. America needs new infrastructure; the American Society of Civil Engineers projected a $1.44 trillion investment funding gap in the U.S. between 2016 and 2025, warning of a mounting drag on business activity, exports and incomes. China has the financial and institutional capacity to build such infrastructure.

China should reciprocate by announcing its sharing its high-speed rail technology with the U.S. to help jumpstart the U.S. economy.

An unusual U.S.-China partnership on infrastructure development can be complemented by another equally unusual partnership between Europe, Japan and India to build infrastructure in Africa. The long-term strategic nightmare for Europe is clear. Over time, with the population explosion in Africa, the floods of illegal migrants from Africa will only grow. The recent surge of boats across the Mediterranean has provided a clear warning of what is coming for Europe. I had warned about this coming human flood in an essay for the National Interest in 1992. Europe needs to build dykes. The only truly effective dyke would be the promotion of economic growth and development in Africa. Europe can try to do this on its own but its colonial history in Africa still creates psychological obstacles. Working with India and Japan, more realistic projects will be conceived and launched in Africa.

In short, if the G-20 is to demonstrate that it is serious about its mission of promoting global growth, it has to snap out of its current mold of issuing long communiqués and launch concrete projects that demonstrate that real economic cooperation is taking place. This is why it is good to start with infrastructure. It is clearly visible. People will see the benefits. Faith in the G-20 will be restored. 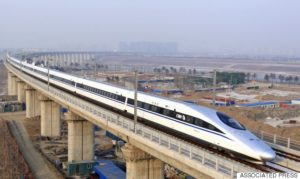 A bullet train passes over Yongdinghe Bridge in Beijing on Dec. 26, 2012. China’s high-speed rail line is the longest in the world. (AP/Xinhua, Jiao Hongtao)

Faith in the G-20 also needs to be restored for another reason. Many people in advanced developed countries now see globalization as a threat and not as an opportunity. This is why the British voted against their own economic interests in opting for Brexit. Similarly, the emergence of Donald Trump reflects a strong desire among the American body politic to build new walls and cut Americans away from the world. Abstract economic arguments cannot change such attitudes. Another bestselling book by Tom Friedman arguing that the world is flat will not do the trick.

Instead, what the public needs to see are concrete projects of cooperation that yield both jobs and benefits. The initial projects have to be high profile and be seen to make a difference to the lives of people. Symbolic steps can also help: the G-20 should endorse both the Trans-Pacific Partnership and the “One Belt, One Road” initiative. In short, if the G-20 leaders can demonstrate that they have liberated themselves from 19th century geopolitical zero-sum thinking, they will revitalize the G-20 process.

Europe, Japan and India should work together to build infrastructure in Africa.

One small photo opportunity can help to send the world a signal that their thinking is changing. At their traditional photo shoot, the G-20 leaders should take two pictures instead of one. In the first picture, they should all wear their national hats, demonstrating that they are national leaders. In the second photo, they should wear a common hat, perhaps a blue hat with the United Nations logo, to demonstrate that they also share a common responsibility of managing our small fragile planet. As they say, a picture is worth a thousand words.