Why Asia Doesn’t Have a Donald Trump or Bernie Sanders

SINGAPORE — The rise of Donald Trump and Bernie Sanders in American politics has shocked the world. America has consistently projected itself as the country that could be trusted for political predictability and stability. While extremist or fringe movements might emerge in other countries, American political culture, by contrast, would be dominated by sensible centrist figures, like Jeb Bush and Hillary Clinton. Astonishingly, one has dropped out of the race. The other remains, but is shaky.

So what happened? Is this just another passing political phenomenon? Or does it reflect a structural shift in American politics? Here, a comparison with Asia might help to draw out some structural issues that drive politics. To put it simply, the politics of pessimism provides fertile ground for fringe politicians like Donald Trump, just as it does for Marine Le Pen of the National Front in France. The politics of optimism which used to dominate American political life has now shifted to Asia. It has led to the election of sensible centrist figures in Asia like Narendra Modi in India (May 2014), Joko Widodo in Indonesia (July 2014) and Lee Hsien Loong in Singapore (September 2015).

In the current pessimistic political environments of America and Europe, politicians get punished for truth-telling.

So why have Asian societies drifted to the political center and America — and parts of Europe — drifted to the fringe? The simple answer is that societies that are hopeful of a better future want to put their fate in safe pairs of hands, like Modi, Jokowi and Lee. By contrast, societies whose populations fear the future are driven to try out fringe figures.

The Trump-Sanders surge sends a clear signal that Americans are losing faith in their political establishment. In theory, America has a government of the people, by the people and for the people. In practice, it has a government chosen by the people to serve special interests, not their interests. This perception of American policies being hijacked by special interests was accentuated by the 2008-09 financial crisis. American bankers almost destroyed the American economy, yet only one top one went to jail. Bernie Sanders captures the American anger well when he says, “The sad reality is that the Federal Reserve doesn’t regulate Wall Street; Wall Street regulates the Fed. It’s time to make banking work for the productive economy and for all Americans, not just a handful of wealthy speculators.” He also notes: “If Congress cannot regulate Wall Street, there is just one alternative. It is time to break these too-big-to-fail banks up so that they can never again destroy the jobs, homes, and life savings of the American people.” 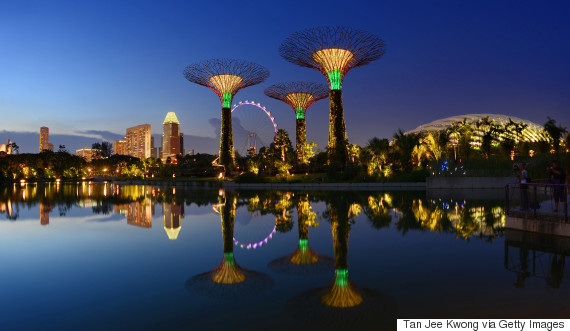 Gardens By The Bay, Singapore. “Societies that are hopeful of a better future want to put their fate in safe pairs of hands.” (Getty)

Inequality and long-term unemployment have made matters worse. Sanders has also stressed that the top 0.1 percent of the American populations own almost as much wealth as the bottom 90 percent. Few white middle-class Americans believe that their children will have a better future. Hence there is a large inchoate anger in the American political system driving the emergence of political extremes.

By contrast, several Asian societies (not all) have shunned populism and taken economically necessary but unpopular decisions. Modi bravely removed gas subsidies for consumers with a taxable income higher than 10 lakh rupees — about 14,600 USD — per annum. Similarly, Jokowi did the same when he abolished fuel subsidies, with the exception of a small subsidy of 1,000 rupiah — 0.07 USD — on diesel. Lee Hsien Loong, has, of course, respected his father’s warning against creating budget-busting subsidies. Even Malaysian Prime Minister Najib Razak, despite his political travails, introduced a tax on goods and services that riled many.

Lee Kuan Yew once said, ‘I always tried to be correct, not politically correct.’

Inevitably, there were some protests against these anti-populist moves. But none of these leaders changed course. Each of them could see a better future down the road for their societies. Hence, they stuck to doing the “right” thing. Interestingly, many Asian leaders were inspired by Lee Kuan Yew’s political legacy. Lee Kuan Yew once said, “I always tried to be correct, not politically correct.” He also believed in telling his people “hard truths,” not politically convenient ones.

In the current pessimistic political environments of America and Europe, politicians get punished for truth-telling. Chancellor Angela Merkel is right to say that, aside from Germany’s humanitarian obligations, the Syrian refugees also represent a demographic dividend for an aging Germany. She has been punished for telling the truth. 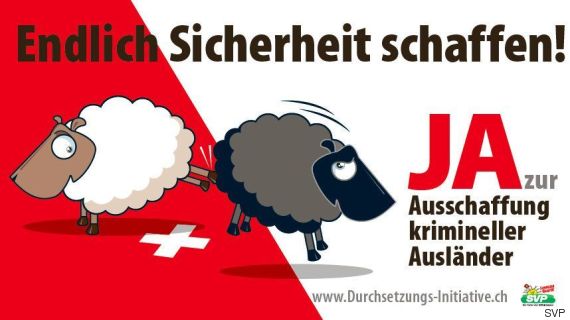 To campaign for an immigration initiative in the referendum, the right-wing Swiss People’s Party uses political posters depicting a white sheep kicking a black one over the border. (SVP)

Even more amazingly, the normally sensible Swiss might actually vote in a measure that could subject any foreign resident to automatic deportation, if convicted of offenses ranging from murder to two lesser offenses, such as speeding, committed within a 10-year duration. There’s even political posters like the one above depicting foreigners as black sheep.

Can populism be killed in the West? Yes, it can. To do this, the dominant negative narratives in the media need to be balanced with positive narratives. The average Western citizen believes that the world is going off the rails. The media only tell this story. Yet, objectively speaking, the world is not being derailed. Military conflicts are on a long-term declining trend. Poverty is diminishing. Middle-class populations are exploding all around the globe. New markets are emerging. After the current downturn, a better future beckons. In short, with the right leadership, Western countries, like the rest, can hope for better futures.

Source: Why Asia Doesn’t Have a Donald Trump or Bernie Sanders | HuffPost