The US public rarely gives Indonesia, the most populous country in Southeast Asia, more than passing thought, and even then might be thinking about nothing more than a vacation in Bali. Yet, the world’s fourth most populous nation, home to more Muslims than any other country, more than in the entire Arab world, is one huge growing deal.

Trust me: my suntan-lotion caricature is only a slight libel on America’s grasp of global reality. Save rare exceptions – late diplomat Richard Holbrooke and former US secretary of state Colin Powell come to mind – even foreign-policy potentates tend to psychologically lock their gaze across the Atlantic, in the fashion of France’s famously ­narrow-minded Maginot Line. Even our vaunted pivot to Asia turned into little more than a China pit-stop.

Southeast Asia’s key multinational institutional presence is the Asean, hitting its 50th birthday next month. To be sure, Nato it is not; then again the Association of Southeast Asian Nations, with a coordinating secretariat in Jakarta, reflects the consensus views of 10 nations whose aggregate population of 650 million is half of China’s and twice that of America. That’s something.

US President Donald Trump gets a hug from his French counterpart, Emmanuel Macron, as Indonesian President Joko Widodo looks on, as G20 leaders gather for a photo on the first day of their summit in Hamburg, on July 7. Photo: AP

Big power snubs and missteps in Southeast Asian diplomacy are ­recounted with professional polish – and a splash of relish – by Kishore Mahbubani in The Asean Miracle (his latest, written with diplomat/writer Jeffrey Sng). The book lays out almost everything important about the current state of Southeast Asia, especially a well-documented portrait of major-power geopolitical myopia, in China but especially in the US, even in the supposedly well-informed academic community: “Many American social scientists on Southeast Asia who seem to rely primarily on New York Times press clippings for raw information on the region,” they write, “do not really know well the societies of Southeast Asia.”

This critique of Anglo-Saxon views has long been a trademark touch of Mahbubani, a celebrated Singaporean career diplomat who in 2004 became the founding dean of the Lee Kuan Yew School of Public Policy at the ­National University of Singapore, often ranked Asia’s No 1. His range of thought is vital to comprehend today’s world politics. Ethnic Indian and Singapore-born, he caught the diplomatic world’s eye during his first tour as Singapore’s United Nations ambassador in the 1980s, in an era when the controversial Lee Kuan Yew was prime minister.

Much like Lee, Mahbubani has been an unrelenting realist about world geopolitics – but leavens his view with an attractive core optimism, and a tendency to kick sleeping dogs rather than let them lie. A current concern ­includes the dilemma of smaller Asian nations seeking recalibration of voice, attitude and profile in this roiling era of a rising China and a flatlining America.

Though The Asean Miracle offers original portraits of this fidgety class of countries, it is its savvy treatment of the question of “Asean and the Great Powers” that breaks such important ground.

For the China-US relationship does not depend simply on the two greatest powers relating only to one another. Each may obsess as claustrophobically as it wishes in peering through the two-way trans-Pacific telescope; but the bilateral is only part of a complex chemistry. While America has only Canada and Mexico­, the country count on China’s ­border is no fewer than 14.

Some of China’s neighbours are easy enough – Mongolia and Laos keep few lights burning late in the foreign affairs ministry in Beijing. But some others, such as Vietnam, are anything but.

It is true that except for Japan and India, none can credibly scare China for very long. But wrapped ­together in shared economic interests, historically anti-communist Asean is to be reckoned with – and it includes even socialist/communist Vietnam.

What should China do? 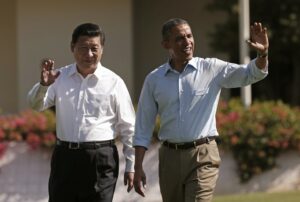 Visiting President Xi Jinping and then US president Barack Obama in California, on June 8, 2013. Even the administration of Obama, who once lived in Indonesia, offered inadequate attention to Asean. Photo: Reuters

Beijing can seek to erode Asean unity (shoving aid at Asean member Cambodia, for example, was not subtle), or it can accept it for what Mahbubani senses it is: a growing force in world politics, potentially even a mechanism for leveraging Washington’s Seventh Fleet away from (as Beijing sees it) intrusive unilateral involvement.

Asean is thus a tool for China, not an impediment. As Mahbubani and Sng put it: “If China wants to prove that – unlike the United States – it will emerge as a peaceful power, the best place to show the contrast is with Asean.” They note that Chinese President Xi Jinping ( 習近平 ) has ­proposed a new type of great-power relations. To this end, Asean should be a diplomatic instrument for ­Beijing to want to work with, rather than break.

What about the US? It needs to wake up. Even the administration of president Barack Obama, who once lived in Indonesia, offered inadequate attention. Now we have much worse, concludes The Asean Miracle: “Unfortunately, the election of Donald Trump will lead to a greater distance between America and Asean as Trump is woefully ­ignorant about Asean.”

The Trump administration’s slasher attack on the US State ­Department budget speaks ­volumes. Not surprisingly, US public opinion soundings suggest the American people increasingly ­believe their president knows little more about the world than they do. Bali, anyone?

Professor Tom Plate is founder of Asia Media International and Loyola Marymount University’s Distinguished Scholar of Asian and Pacific Studies. His next book is Yo-Yo Diplomacy: An American Columnist Tackles the Ups-and-Downs Between China and the US

Source: Why China and the US cannot afford to ignore Asean | South China Morning Post