SINGAPORE — Singapore turns 50 on Aug. 9, 2015. Is Singapore the most successful society since human history began? Or, to put it differently, did Singapore improve the living standards of its people faster and more comprehensively than any other society?

The only way to answer these questions is with empirical data. The most basic needs of any human being are food, shelter, health, education and employment. Did Singapore improve the delivery of those basic needs faster than any other society?

When Singapore was expelled from Malaysia in 1965 and thrust into an unwanted independence, it was a typical Third World country. Its per capita income of $500 was the same as Ghana’s then. It was not desperately poor, but it had malnutrition. I know this personally as I was put on a special feeding program when I joined school in the first grade, drinking milk from a pail with a ladle shared by other children.

This malnutrition disappeared quickly. Singapore’s per capita income has shot from $500 to $55,000 today, the largest increase any newly independent nation has enjoyed. This spectacular economic success story of Singapore is clearly amazing. Yet, when I was Singapore’s ambassador to the UN in the 1980s, the then head of UNICEF, the American James Grant, used to chide me for speaking about it.

Table 2: Percent increase in real GDP from year listed to 2014 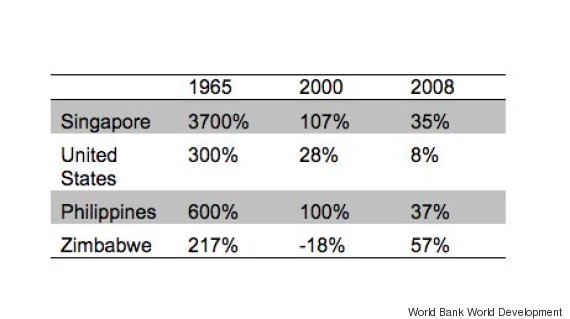 He told me that Singapore’s success in another area was even more spectacular. We had reduced our infant mortality faster than any other society, going down from 35 per 1,000 live births in 1965 to 10.90 in 1985. James Grant was right. Babies are the most vulnerable members of any society. When they live instead of dying, they reflect an improving social ecosystem that keeps them alive.

The babies who lived in Singapore went on to enjoy one of the best education systems in the world. The OECD ranked 15-year-old Singaporean children number one in the world in a recent global ranking of “Universal Basic Skills” in mathematics and science. Singapore students also topped the OECD PISA problem solving test in 2012.

From the Singapore with slums that I grew up in, we now have the highest home ownership of any country in the world, with 90 percent of residents living in homes they own.

There are many other areas where Singapore’s social standards top the charts. From the Singapore with slums that I grew up in, we now have the highest home ownership of any country in the world, with 90 percent of residents living in homes they own. Even amongst households in the lowest 20 percent of incomes, over 80 percent own their own homes. Rapidly rising salaries and strong compulsory saving schemes, through the Central Provident Fund, led to this incredibly high home ownership.

So why did Singapore succeed so comprehensively? The simple answer is exceptional leadership. Many in the world have heard of Mr. Lee Kuan Yew, the founding prime minister who passed away in March this year. Far fewer have heard of Dr. Goh Keng Swee, the architect of Singapore’s economic miracle, and Mr. S. Rajaratnam, Singapore’s philosopher par excellence.

Together, they made a great team.

This exceptional team also implemented three exceptional policies: Meritocracy, Pragmatism and Honesty. Indeed, I share this “secret” MPH formula with every foreign student at the Lee Kuan Yew School, and I assure them that if they implement it, their country will succeed as well as Singapore. Meritocracy means a country picks its best citizens, not the relatives of the ruling class, to run a country. Pragmatism means that a country does not try to reinvent the wheel. As Dr. Goh Keng Swee would say to me, “Kishore, no matter what problem Singapore encounters, somebody, somewhere, has solved it. Let us copy the solution and adapt it to Singapore.” Copying best practices is something any country can do. However, implementing “Honesty” is the hardest thing to do. Corruption is the single biggest reason why most Third World countries have failed. The greatest strength of Singapore’s founding fathers was that they were ruthlessly honest. It also helped that they were exceptionally shrewd and cunning.

Singapore’s success is due to MPH: Meritocracy, Pragmatism and Honesty

Still, Singapore has its fair share of detractors. Its political system was widely viewed as being an “enlightened dictatorship,” even though free elections have been held every five years. Its media is widely perceived to be controlled by the government and Singapore is ranked number 153 out of 180 by Reporters Without Borders in 2015 on the Press Freedom Index. Many human rights organizations criticize it. Freedom House ranks Singapore as “partially free.”

Undoubtedly, some of these criticisms have some validity. Yet, the Singapore population is one of the best educated populations and, hence, globally mobile. They could vote with their feet if Singapore were a stifling “un-free” society. Most choose to stay. Equally importantly, some of the most talented people in the world, including Americans and Europeans, are giving up their citizenship to become Singapore citizens. Maybe they have noticed something that the Western media has not noticed: Singapore is one of the best places to be born in and to live in. Quite amazingly, a society destined to fail in 1965 has become one of the world’s greatest success stories.

Source: Why Singapore Is the World’s Most Successful Society | The Huffington Post