© 2017 Hogash Studios.
Can the World Order Catch Up with The World? by Kishore Mahbubani – Project Syndicate 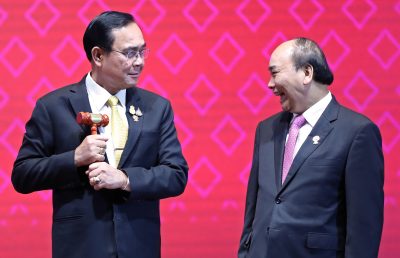 ASEAN should have begun to crack and fall apart from the strain of the rising geopolitical rivalries in Asia between the United States and China, if what critics say about its fragility were true. But ASEAN steadily marched through another difficult and challenging year and quietly delivered many positive results that will improve the wellbeing of its 650 million people.

Most importantly, there were no wars or conflicts. Indeed, not even serious political tensions. ASEAN did not experience any aerial battles like the ones between India and Pakistan in February 2019 or a major military assault like the drone attack on the Saudi Arabian oil installations that took 5 per cent off global oil supplies.

ASEAN consistently and quietly delivers peace to one of the most Balkanised regions in the world. Yet, no one notices.

ASEAN economies continue to grow moderately but steadily. A few years ago, Western media reported with great fanfare that India had surpassed China as the fastest-growing major economy in the world. There will be no such fanfare when the results show that ASEAN grew faster than India in 2019. Nor are many people aware that ASEAN is already the fifth-largest economy in the world with a combined GDP of US$3 trillion.

More remarkably, the understated and quiet leadership of ASEAN managed to pull off one of the biggest coups in recent economic history by announcing the completion of negotiations on the Regional Comprehensive Economic Partnership (RCEP), the world’s largest free trade area. RCEP’s 15 member states make up 30 per cent of the world’s population and 29 per cent of the world’s GDP.

Singapore’s Minister for Trade and Industry Chan Chun Sing observed that ‘RCEP is more than just an economic agreement. It is a strategic signal to the rest of the world that this part of Asia continues to believe in upholding a global, multilateral trading order’. India’s last-minute decision not to join could have stalled and broken down the RCEP process and could have been as distracting as Brexit. Instead, the wisdom of the ‘ASEAN minus X’ formula shone through.

ASEAN has always believed that perfection is the enemy of the good. If not all participants can join, the rest will proceed first. India will come to realise that its ‘Look East’ and ‘Act East’ policies will mean absolutely nothing if it does not join RCEP.

The completion of RCEP was particularly critical against the backdrop of the escalating trade war and the larger geopolitical contest between the Unites States and China. ASEAN could have been paralysed or broken apart by this rivalry due to a struggle between its more pro-China members and the more pro-American members. Yet, the culture of accommodation and pragmatism prevailed.

The Prime Minister of Singapore Lee Hsien Loong spoke for many in the region when he said at the Shangri-La Dialogue on 31 May that the region should not be divided by geopolitical contests. He insisted that regional cooperation initiatives proposed by other countries ‘should strengthen existing cooperation arrangements centred on ASEAN. They should not undermine them, create rival blocs, deepen fault lines or force countries to take sides. They should help bring countries together, rather than split them apart’.

Significanly, ASEAN launched its own ASEAN Outlook on the Indo-Pacific due to fears that the US Free and Open Indo-Pacific strategy could divide the region. Indonesian President Joko ‘Jokowi’ Widodo argued for the need to cooperate with China within ASEAN’s Indo-Pacific framework and to build connectivity and infrastructure between ASEAN and China.

In recent years, the South China Sea issue has been divisive. Against this backdrop, it was significant that on 31 July 2019, China revealed that ASEAN and China had completed the first reading of the single draft negotiating text for a Code of Conduct ahead of schedule. This was commended at the ASEAN–China Summit in Bangkok on 3 November.

While Beijing continued its steady and constant engagement with ASEAN, Washington remained domestically distracted. US President Donald Trump did not attend the ASEAN–US Summit in Bangkok on 4 November 2019. Neither did US Vice President Mike Pence nor US Secretary of State Mike Pompeo.

Only the US National Security Advisor Robert O’Brien turned up. As a result, only 3 of the 10 ASEAN leaders — Thailand, Vietnam and Laos — attended the meeting. Washington was miffed, but as Hoang Thi Ha observed, the United States missing meetings with ASEAN was a classic case of déjà vu for Asia. Each such absence is a geopolitical gift to China.

It would be a mistake, however, to believe that ASEAN will drift inexorably into a Chinese sphere of influence. Over the years, ASEAN has accumulated quiet geopolitical wisdom. It will keep all windows open and also take advantage of unexpected geopolitical opportunities.

In recent years, South Korea has been in a tough spot. It has experienced difficult relations with China over THAAD, Japan over ‘comfort women’ and the United States over base funding. It made sense for ASEAN to reach out to South Korea — leading to a tremendously successful summit between ASEAN and South Korea on 26 November 2019 in Busan.

The wisdom and resilience that ASEAN revealed again in 2019 took years to develop. The Indonesian culture of musyawarah (consultation) and mufakat (consensus) has become embedded into the DNA of ASEAN and has proven to be a major asset. Perhaps the time has come for other regions to come and study this ASEAN ‘miracle’. Emulating ASEAN may be a productive approach for other regions to adopt.

Kishore Mahbubani is Distinguished Fellow at the Asia Research Institute, the National University of Singapore, and author with Jeffrey Sng of The ASEAN Miracle (NUS Press, 2017).

This article is part of an EAF special feature series on 2019 in review and the year ahead.